Original webcast date March 8, 2016 Geoff of Twelve/Three will review a great new feature of Act!, the History List. The History List was introduced 2 years ago in v16 as a way to view a consolidated list of all histories in the database. It is a very fast and instant way to generate flexible […] 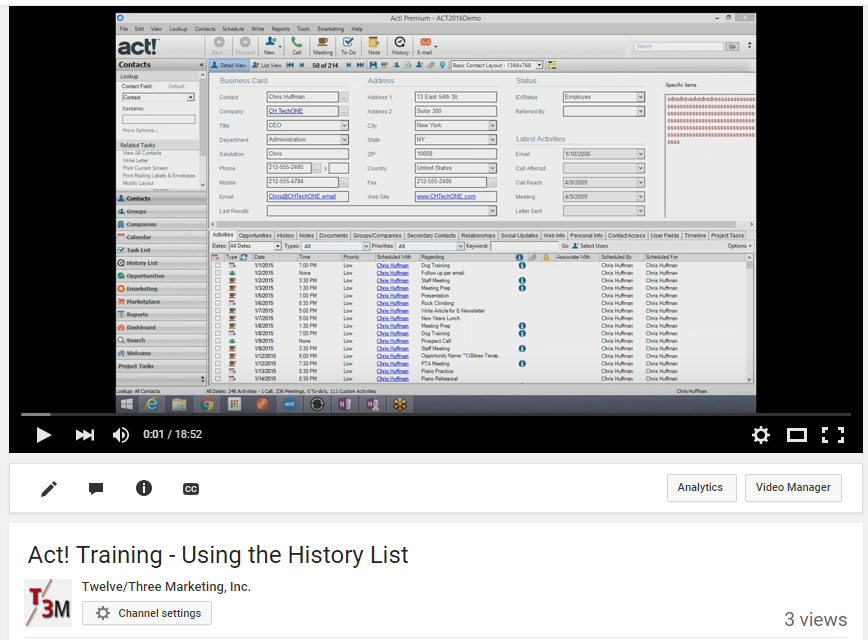 Microsoft has released Windows 10 on July 29th 2015.  Here are some considerations before your upgrade.

This article is updated thru October 1st 2015.

These issues will likely be fixed when Swiftpage rolls out their official Windows 10 support update.  This list is collected from various user reports, is not necessarily consistent with every installation.

Some users have reported that:

Several of these errors do have associated knowledgebase articles that can repair them.  But they are listed here as sometimes not working right “out of the box.”

If you purchase a new computer that has Windows 10 pre-installed, you should be able to install Act! v17.2 fresh, apply HotFix 0, and run it fine with no issues!

We want you to get the most out of your Act! software.  Here is a quick list of some good practices to keep everything running smoothly! Clean out the history of your Act Contact Record – Every Act user has a contact record in Act. When you log into Act, your Record is the first one […]

Twelve/Three’s Act! Roadshow is Coming! See what’s new in the 2015 release, Act! v17. All attendees receive discounted upgrade pricing! Our Act! Roadshow is a free hands-on demo of the new software, where you can ask questions, network with business owners who use Act!, and learn a few things on the way. Not to mention, […]

All versions include features of prior versions, in addition to those listed.